Such a pretty face, with a spirit that matched. Never met her, but remembering the show Biorhythm on MTV back in 2001, and the music to the story of her life that led up to her final journey and eventual homegoing on August 25...it still bothers me. For many reasons...I think it was because she was my age, and I felt the loss hard. I woke up on the morning of her funeral and began to cry...in tears. My boyfriend at the time consoled me, probably thinking he was going to leave my ass by at least October, but I knew in my heart that this just wasn't right. It wasn't supposed to happen like this.

And then September 11 happened...a day none of us forget who lived in NYC...and pretty soon, we approached Aaliyah's first birthday that wouldn't be shared with us that January, and soon after, Damon Dash met Rachel Roy...the rest, they say, is just history.

To her family and particularly her brother Rashad, whom I always remember her bring up in just about any interview, was a testiment to her love for her family...and that just made it worse.

Some may say she wasn't the best singer, but it wasn't about that to me. She grew up in front of us without the scandals that maybe if blogs existed in the nature they do today, would have been another one of those girls...maybe Aaliyah's death saved her from that particular type of life no celebrity enjoys living...they still try to live off of her marriage to R. Kelly...would she have been as graceful 8 years later if a blogger told the story?

All I know is Aaliyah's death that Sunday woke me up from the life as I knew it...changed my way of thinking for a couple of weeks.

Why you can't talk about certain shit...

It gets you shot. Even killed. 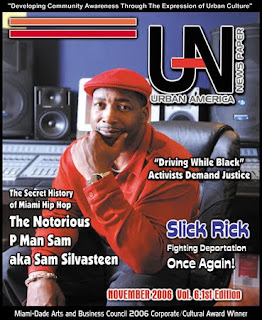 Sam Ferguson, of Don Diva Miami was driving down a Florida Turnpike on Friday afternoon (9/14) when he was shot by an unknown assailant/s. No information on the shooters besides a black car and clear headlights.

You can chat amongst yourselves, but just for reference, this is the man who thought everyone should know that at one time, Rick Ross was a Correctional Officer. Just to refresh your memories. He was also friends with Miami City Commissioner Art Teele...who killed himself in the lobby of the Miami Herald in 2006. Was also a staple in the Miami Rap scene, long before 2 Live Crew were a crew and such...

I always think it's funny when someone says there were no witnesses in these types of cases...who the fuck wants to get shot? That's why I'm actually going to end this post now.

...go on a hiatus. I was kinda pissed about the Black Weblog Awards (mainly at myself, followed by calling them a bunch of ), followed by a lot of BS going on both in my personal and work life. Then I realized I kinda already did go on a hiatus, so now I guess was the first day I actually said it out loud.

But I sat on the train (yeah, the #1 train) realizing I have so much to talk about, just by looking through my camera pics. I've done a lot, but I've gotten so caught up in my daily job, my blog has become awfully quieter than it's original intent.
That said, a while back I challenged myself to a 7-day blog post challenge. I think I made it two posts on the first day...then nothing. I guess I need to take baby steps with this...I also blame the celebrities, who go on a hiatus from being assholes, then all start acting up at the same time. And some of it just isn't worth a blog post to me, but I also must realize that you, my 15 followers, along with those who'd like to rather not say they read my blog, care about these things. So I should say something about them. The going-ons...stuff.
I've also had this fear of being brutally honest, (seriously) I mean, once it's out there on the Internets, it's everywhere. Remember, I want to be a CEO, I don't need this shit haunting me...but then again, it's my journey. I doubt I will be the same person I am now at 40, because I damn sure am not the girl I was at 20. By then, I should have enough props to be a proper CEO.
Until then...time to really meet Black Daria. It's time for some feelings to get hurt, including my own...so here we go...
I thought you should know about this debacle, as I find it to be amusing...Amber Rose pics came flying up last week because someone out there in the media decided we should see breasts at least once a month, and definitely a naked body should circulate to keep our mind off the fact that some kids in the US can't read.
Amber was available for the task, then, BOOM...someone goes into an archive and pulls out Grace Jones: 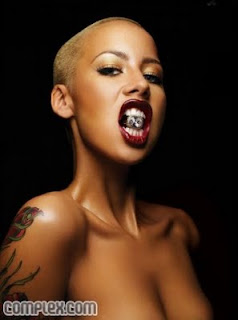 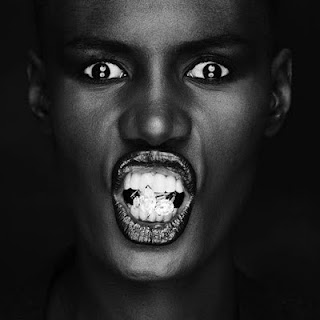 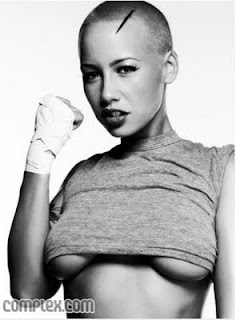 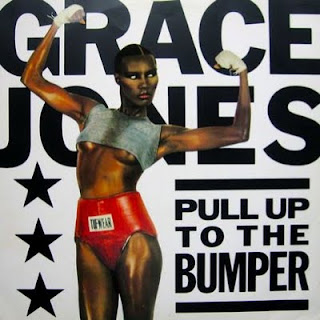 Grace Jones
After seeing this on Gossip Jacker, a site I am slowly becoming addicted to, I laughed because isn't it just...funny? Got some questions though....
1. There's nothing wrong with paying homage to someone who came before you and defy odds of some sort. Amber's trip towards stardom certainly must have equated Grace Jones rise to stardom...oh yes, totally.
2. Who took the Complex Pictures? Was the point to jack Grace Jones looks because that's who she's been put up against? Is it the bald head?
3. If this were America's Next Top Model, who would Tyra pick to win this right now? Seriously, think about if these pictures were up on the screen next to each other...you know how Tyra and her crew would have done this deliberation...
Ok, enough of my questions...what are your thoughts? Amber Rose doesn't really care, BTW, she says so everytime Mediatakeout talks about her...just thought you should know, and how I know is because I follow her on Twitter...hey, she just might say something stupid, and I may be able to catch it...or something.
Go on...discuss. If you want to see more of these fabulous pictures, please visit my friends here. I jacked them, so I owe them. That's how this works, or so they say.
xoxo,
Black Daria ;/
Posted by black daria at 6:36 PM 1 comment: