So...what are you going to do about it? Is this the part where I put my 'nice' face on and beg and plead for your vote? Ask you to tell a friend? Tell you i'll cook you dinner or watch your kid/s (I can handle it) for free for a week?

I'm not going to turn tricks, I already decided that would be bad for me considering I want to be a CEO one day...in the meantime, I ask you to vote for moi.

Best Humor Blog (am I funny?)
Best New Blog (only less than 1 year old...check)
Best Writing in a Blog (do I move you with the words I write? Please note I wrote all my Black Daria Films)
Blog To Watch (could I be Hot? get 5 more readers, or 10?)
Best Microblog (my intimate moments, plus a bit of chatting in between, followed by occasional rants...no holes barred)

"...I always want to know what makes good performers fall to pieces," Michael says. "I always try to find out. I just can't believe it's the same things time and time again."
- Michael Jackson, as told to Rolling Stone Magazine, February 1983 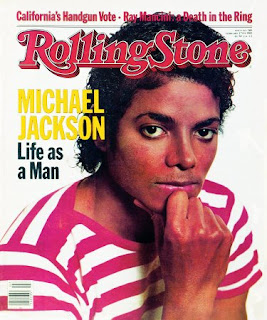 According to Rolling Stone, "Inside the Magical Kingdom" was Michael's last-ever in-depth interview.

I should probably talk about something else, but I thought a few entertainers may want to read that quote, because I read it about 7 times.

Crazy, huh? What the fuck was going on in Janet's head when she heard this?

Letters poured into "Keeping it Real, Whitney" asking why she, the greatest singer of contemporary music, wasn't at the BET Awards on Sunday, June 29, 2009.

So Whitney did what any good talk show host should do: invite the person who was behind the show to come to hers and answer some questions.

There were tons of issues, but Whitney touched on a few in this interview with Debra Lee, Chairman and CEO of BET. And I know Debra Lee isn't graying by any means. I've seen her wig up close and she keeps it tight. Xtranormal doesn't have many options for older black women, but that's OK, you'll forget all of that as soon as Whitney gets to the bottom of things.

BET Awards, Breasts and Bafoonery - It's the week of "B"s...

So, there's been a lot of talk about the Lil'Wayne/Drake performance at the BET Awards 2009, and it's not very good. Well, considering the fact that some genius decided it would be just fine to:

1. Have Drake perform, although he'd torn his ACL (that's the story, anyway)

2. Proceed with a Lil' Wayne performance - a polar opposite to the legend's memory that they were supposed to be honoring, Michael Jackson

3. Have girls between the ages of 13-16 (guessing, because some if not all may not even be 16 yet) come on stage, clearly not trained in any form of dance besides those they may have seen in a video, but couldn't do those dances anyway (they are looking at each other and wondering what to do)

Yeah, this is what happened on TV this past Sunday. On BET, the same company who may have better spent their dollars investing in Harlem Heights (stop booing) or a children's cartoon block on Saturday mornings.

Since I was fortunate (yes, I meant to say that) to catch them after they aired, I only got to see a completely edited version...I imagine there were people with Molotov Cocktails, Pitchforks and Signs outside of Debra Lee's house. This woman just doesn't get a break, huh?

The good old Internet never fails, so here's the unedited version of Drake and Lil' Wayne...feel free to watch the whole thing (there's also a performance with Birdman and Cash Money, but who cares, because I know I don't. Sorry, I didn't know what or who they were until the BET Awards, I guess that's the point of doing a show like this)...

1. Saying "in honor of the best we ever had," followed by "let's have some fun" doesn't really make any sense. Michael Jackson died, not Bubbles.

3. Ballerinas? Oh no, just...wait...little girls? The madness begins at 3:49. Oh and they didn't forget to mention Miley Cyrus. Isn't that everyone's favorite part of the song?

Maybe if the little girls had a section where they were taught a Michael Jackson dance and performed it to a Michael Jackson song (crucial) would this have been OK...but um...this is a true bad look...sorry, I had to tell the truth.

Rather than sit back and tell you how f'ed up you are, since you've already heard that for about 10 years now, here's a quick solution, courtesy of Black Daria.

An apology on your website for the show. You can go ahead and say you didn't have time and were scrambling, but just say that you are sorry if there were parts that were offensive.

You could continue by saying that "while the show was our first true attempt to honor Michael Jackson, we will be creating a special in the coming weeks, including performances from special guests. We feel Michael is owed a full tribute to his life with a celebration of songs and dances brought to us by the man himself..."I don't know, something like that.

Either way, you have work to do. Good luck. Feel free to call me for additional questions or other solutions.


P.S. Hmmm...I don't know if this was a good follow up Drake...Breasts you ever had much? Why not have just gotten the Degrassi cast? Shenae loves you...trust me, I read it in US Weekly, or Life & Style, or one of those magazines.

Well, every case study should have a good appendix, so here's one: 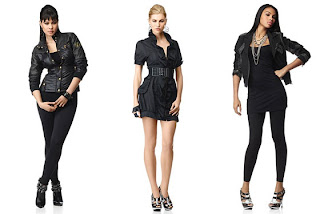 Introducing Sasha Fierce, the clothing line. By the way, this is a Back-to-School collection...wholesome, isn't it?

New York Magazine probably wouldn't have much to say good about Beyonce doing a fashion line since they cater to those who basically live on the upper east and west sides of Manhattan, along with the hip Subscribers and libraries around the country who subscribe to them, but here's their take on the whole thing. I guess I would be OK with this (such a lie) if this were for girls going to the club, and being sold at Fredericks of Hollywood, or Pretty Girl on Jamaica Ave. Hell, this is even Macy's...right next to the Pastry section...except...

What age group is wearing this? Sorry, my mom wouldn't have let this go down, and I made quite a few risky fashion moves in high school. I was definitely a 90s girl, thigh-high tights and all...nothing like my sister's Doc Martens.

I think this will be in my local El Mundo (only people who live Uptown in Harlem, Washington Heights or the Bronx know what this place is) or TJ Maxx by next summer.

It was a little after 5:00 PM, and I was upstairs in a conference room on Nickelodeon's executive floor. My colleagues and I were watching a reel from an event the day prior, and the President of the Network's assistant opened the door and said, "Did you hear? Michael Jackson died of a heart attack."

"Shut UP!" I yelled. She had to be lying. I asked her to excuse my figure of speech, which she caught onto quickly (can't be telling the assistant to the President to shup up).
I dropped into a fetal standing position, so my knees were touching my head, my bottom not too far from the floor. All I could think was that this wasn't happening.
I got home, and remembered I had no cable. Good, now I don't have to be bombarded with images of Michael leaving his home and going into the hospital. I didn't want to see him like that...because it just couldn't be true.
An hour later, all I could think about was the Apollo. I need to be there...and that's where I went.
Got on the wrong train to 125th street, so I had to take a walk from Broadway, but as I approached, I got chills, realizing that it was really true. And then I saw the marquee: 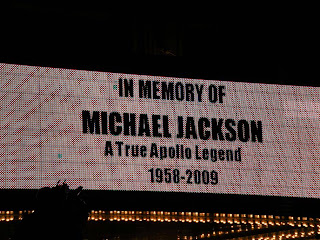 Moved on, but my camera battery began to get exhausted...so I left, and went to have a big old glass of wine with a person I knew had to understand what I was feeling about Michael right at that moment.
Fast forward, I find myself thinking about him everyday. He was my friend...wasn't he everyone's friend? Michael meant so many things to so many different people, whether you are gay, from South Africa or went to prep school. Michael influenced us all, from Members Only jackets, to some of the hottest videos that can never be duplicated.
Too cliche to say "There will never be another Michael Jackson," because we already know that...that's easy.
My personal story comes from a former mentor, who stayed with Michael at Neverland. I was interning with her, and all she said was "he was the nicest man...always laughing, he laughed at me when I told him I wanted to get off that fucking ferris wheel...I was cursing him out and he just kept laughing at me..." A friend reminded me of the story, as he was telling me about an interview he'd seen with Sheryl Crow, who has a similar story that she experienced a mere two weeks ago. I loved hearing that about him, and it stayed in my heart.
The power of Michael Jackson has stopped traffic for four days on 125th Street, brought crowds to the Hollywood Walk of Fame, all the way to the tents lined up at Neverland Ranch, as they begin to bring in the port-a-potties. Michael has crippled the Internet, will be 9 of the top 10 Billboard Albums next week, and shed a slightly opaque curtain on the recent Iran election, "coup in Honduras, an insurgency in India..." and the other topics my great friend from college, Saki, talks about and literally shows up at the rallies for when she isn't busy changing the world. I say that with love, and she knows that.
I sat on the #1 train (oh joy) and I heard a woman in Russian (I have skills) tell another woman something...but then she said "Michael Jackson" and began talking in English. Damn. Michael has it on lock down...I just said last week that Michael Jackson saved MTV from an "EPIC FAIL" as the twitterers call it...and I can't believe that he's gone this week.
This may go down as just another post that my 15+ followers read, but I will tell you this...Michael changed my life in his own special way...and we just can't take that away from him by sweeping him under the carpet for yesterday's news. His music changed me...you...America...the WORLD.
Only a true prophet could achieve such a large task. And it was through the one thing that has probably always been there for me after the rallies in college, the days of being laid off and starting a business...the breakups. It was music...and a little Black boy and his brothers from Gary, Indiana, did all that.
To the KING...rest in peace, eternally. And P.S. - I never believed them. 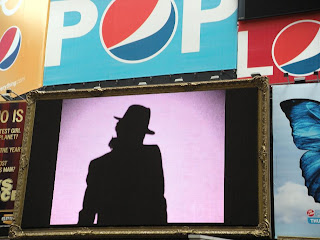 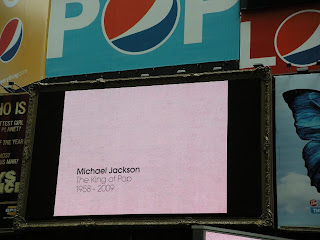